Briefly, a gas turbine engine can be described as a machine delivering mechanical power by using a gaseous working fluid which is actually the application of the Newton Law. Compared to the reciprocating Otto and Diesel piston engine, the major difference is that the working fluid flows through the gas turbine continuously to produce powerful work. The continuous flow requires compression, heat input and expansion taking place within separate components. For this reason, a gas turbine at least consists of compressors, combustion chambers and turbines.

First, the compressor will compress the air to increase air pressure; then, the compressed, high pressure air mixing with fuel is burnt in combustion chamber to get chemical energy; lastly, the mixed gas will be expanded by turbine to produce work. Part of the work is used to drive the compressor, the rest to produce power or thrust depending on the application.

Schematic of a Jet Engine

After WWII, the gas turbine rapidly developed as a new and powerful alternative for both industrial and aircraft applications. During the past decades, it has demonstrated its suitability for heavy duty, continuous, base load operation in power generation, pump and compressor applications. Having a high power to weight ratio, high specific power, reliability and low maintenance cost makes it ideal for many applications.

While they share many similarities, there are times when their differences make them uniquely more suitable for a specific application. In the airborne applications these units are referred to as jets, turbojets, turbofans, and turboprops. In land and sea based applications these units are referred to as mechanical drive gas turbines. A major part of the power produced today is from the combined cycle plants which use a combination of gas turbines and steam turbines to generate electricity. These combined cycle systems have an overall efficiency of around 60%. Nowadays these systems are quite popular, due to their relative low CO2 and NOx emissions and ability to compensate fluctuations on the electrical grid.

Apart from the applications mentioned above, as a branch of gas turbine technology, micro gas turbines are becoming widespread. They range from hand held units producing less than a kilowatt, to commercial sized systems that can produce tens or hundreds of kilowatts. Micro gas turbines usually consist of a single stage radial compressor, a single stage radial turbine and a recuperator. By using a recuperator, the waste heat with high temperature can be relatively easily captured.

Over the years, the progress in gas turbine technology has been tremendous. However, everything has its pros and cons, no exception to gas turbine technologies. On the one hand, with the environmental problems faced by humankind as well as the increase of air traffic, emissions and noises from gas turbines need to be reduced; on the other hand, the fuel price has been increasing significantly and consequently the demands for new fuels are highlighted. Therefore, some new engine concepts have been put forward. Looking ahead, these candidate technologies will be developed into products to advance the evolution of gas turbines.

Closure
Most of the major breakthroughs in industry and aviation are the result of the advancements in gas turbine technologies. Today, when one of the biggest challenges faced by our society is energy and sustainability, gas turbines will play an even greater role in shaping our future energy scenario.

Read the article:
"Powering the skies, The evolution of the aircraft engine"

Sir Frank Whittle and his engine 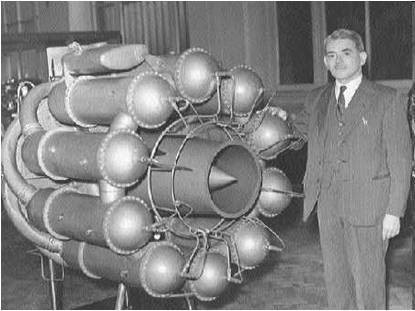